The project team of “Changing Platforms of Ritualized Memory Practices” is proud to announce that we will give a special presentation at the 9th edition of the International Orphan Film Symposium, held from March 30-April 2 in the EYE Film Institute, Amsterdam.

This year’s theme of the symposium, which is organized by New York University Cinema Studies and the University of Amsterdam, is “OBSOLESCENCE”. More than fifty presenters – scholars, archivists, curators, technology experts, librarians, collectors, distributors, preservationists, and artists – will reflect on the history and future of film and other moving image media.

In our presentation we will perform a media archaeological experiment in which we reconstruct the changing dispositif of home movie screening practices. In three ‘tableaux’ we explore how past media usages of film, video, and new media have altered the practices of home movie staging. The experiment is based on our research which aims to trace how changing technologies of memory production have shaped new practices and rituals of memory staging.

The experiment aims to demonstrate how historical reenactments can be helpful as a heuristic tool for understanding the past. For reconstructing more than 100 years of home movie making, text-based sources such as manuals, journals, advertisements and descriptions are valuable. Material artefacts like cameras, projectors, screens, television sets, video recorders have also been relevant sources, as well as the films (9,5mm, 16mm, 8mm, Super-8) and videos (VHS, mini-DV, digital media) themselves. 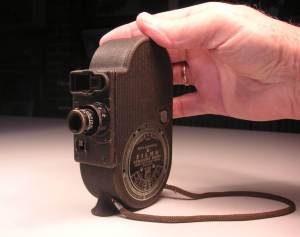 The media archaeological experiment that we will be presenting, however, is not so much about reconstructing ‘authentic’ historical experiences. Rather, as our project coordinator Andreas Fickers has argued in his recent article “Experimental Media Archeology: A Plea for New Directions” (2014), we aim at creating sensorial experiences: why as historians not making use of our senses, hands, and ears as a “second tongue”?

Especially when it comes to the screening and viewing of home movies and videos as a technological, social and cultural activity, the knowledge about these practices soon becomes obsolete. After all, the act of watching home movies has not been recorded as such. And when the technologies involved (i.e. the film projector and the VCR) will become obsolete as well, deep knowledge about them becomes beyond the reach of future historians.

With our little experiment held at the Orphan Film Symposium, we try to prevent the disappearance of sensorial  knowledge about past media technologies and their practices. We ask you to join us in our reenactment of historical practices of memory making!

We hope to see you all at the symposium!